Go to The Stench Forums.

2005 was changing point due the fact that I got reherseal bunker of my own. I had a possibility start to collect large metal sheets, I bought several 3m long heavy chains(heavier one was/is 15 kg).. you know things got into very physical and loud as fuck. 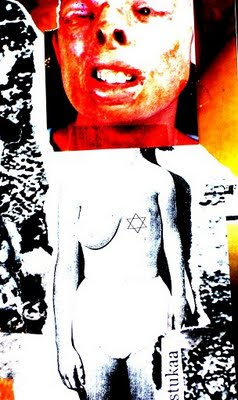 Big amps also got into the picture. Besides environment and all junk etc. one major difference comparing to before 2005 was that I started to aim performing/recording live. earlier it was more or less "studio" tricks. BU sound at the moment is a combination of junk/chain and putrid slowly evolving electronic buzz . Rotten walls of epic filthy noise. Nasty vocals, in your face and buried. I like to mix those 2 styles. Pretty minimal approach not much going on at same time.. usually just two elements going frw molesting the listener. that’s the foundation. tracks usually 15 to 20 min. Its like a fist fuck session. starts pretty mildly to strech your arse hole. one finger, two finger .. .. whole hand. fist forth and back. it hurts at some point but in the end maximum pleasure. feeling a bit dirty afterwards hah. Have you been fist fucked Ryan?

"Lily The Flesh" was aimed for VHS-filth themed compilation, its on progress and I am not sure is it ok reveal details about it. 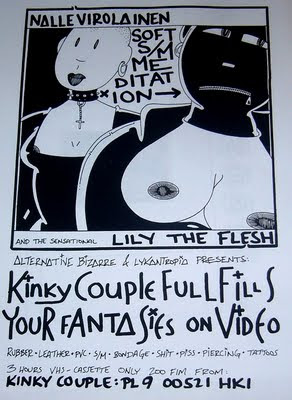 So I shut my mouth. Anyway I went to bunker w/ VHS player and TV. the actual film plus few loose ideas. result was very pleasing, dirty and eerie. It came out such a long piece that it fitted better for BU full lenght release of own instead af compilation. "Lily The Flesh" was a homevideo made by NALLE VIROLAINEN and friends early 90`s .. 1991 maybe? Sold throught XXX magazine`s personal ads. S/M, Piercing, piss/shit etc. one female involved there "IIRIS" what a character, religious person.. Her Monoloque on film is brilliant("Thank you Jeesus") At one scene she is on leach as a dog, outdoor at one small park in Kallio, Helsinki. She starts to eat crass. another scene she is riding on Nalle`s cock and eating raw meat.Doing some animal sounds. hah! IIRIS gave paid sessions back then I gave her a call few times but didt had guts to go see her. She seemed a bit unbalanced person. That was the main reason I decides not to go. NALLE VIROLAINEN was editor of "CHAINS" S/M zine and "LYKANTROPIA" film zine late 80s and one of maker of "ROSKAELOKUVAT" book. Throught his writings I got introduced to ILSA, Cannibal films, Nekromantik, sadism and masochism etc. everything a kid need to grow up. I was 13-14 at time I ordered his zines.
[PURESTENCH : Sex and violence is an explicitly clear influence for Bizarre Uproar. What is it about sex and violence that is so intriguing to you? How does it play into your music? ]

You are or you are not. I am. I have always been.


[PURESTENCH : What are some books/videos/magazines that are particularly interesting to you? Snuff - do you think that snuff films exist? If so have you ever seen one? ]

As a younger I did collect stuff a lot. Now as an older gentleman I use all my energy to get real life experienses/sessions etc.
SNUFF as a film where someone is killed for purpose to sell it for big euros. I would say I don’t think so. Killings are filmed for personal pleasure/use/trophy/ of course but not to sell. Intriquing idea. I wish someone could be degenerated enough to do it.. 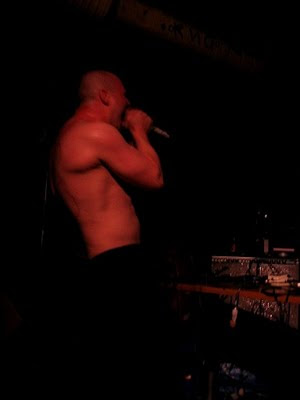 I am a pervert. Pretty much everything goes. I have been w/FA almost 10 years now. it’s a twisted game for sure. At this point I have to state that I show a lot of things in public, but cannot show all. There are things that are better to keep in dark.
Eye infections and once her sharp nail teared big chunk of flesh inside my mouth, after that human toilet paper activity .. Not very wise way to take care of open wound hah!

..But there is more. Everything is not what it seems like to be...

[PURESTENCH : You should write a detailed book with pictures about your experiences with Fallen Angel, I bet that would sell quickly. Speaking of books, can we expect another book in the future? Or maybe some type of collection of Pasi artworks? ]

2012 Feb. I will be part of exhibition in Helsinki w/ SIIKALA & ASPA. There is also 3-way artbook in progress.


[PURESTENCH : The visuals of Bizarre Uproar and Filth & Violence are coherent and obviously very important. Are you involved with the art for every release on the label? How important is art overall to both the label and Bizarre Uproar? ]

I use a lot of time to get dirty enough result. Yeah I am involved w/almost every release artwise. Hmm visuals have been in a big role w/ BU but like last live I played it was in complete darkness. Also upcoming LP going to be just one painting.. Important but might change from minimal to full on fireworks of filth.


[PURESTENCH : How do you choose what to show on the projector or what acts to perform during a live show? ] 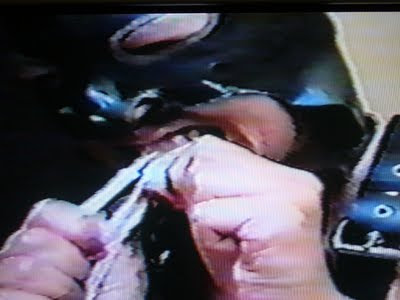 I belive upcoming live things will be without anything extra just filthy noise.


[PURESTENCH : When you play live do you have a set idea of what is going to be played or is it mostly improvised? ]

Some spine where is a some space for improvising.


[PURESTENCH : Your first project "Aunt Mary" was an energetic Noisecore band. What made you go from Noisecore to Power Electronics? Will we ever hear any new Aunt Mary material or is that a dead band?]

I have said this somewhere earlier.. to make it short. AM demised I did continue alone. Did kind of noisecore stuff. fast bursts of rough sounds. What happens when you put a lot of that kind of stuff together. lots of layers. pretty much harsh noise. I did cut up stuff at some point. idea to make structured pieces came 2005. everything has evolved slowly.. Do you feel BU is Power Electronics?
AM did one session this year. AM is not dead but its not feeling very well..


[PURESTENCH : Filth & Violence has been dabbling with Noisecore and Black Metal releases for a few years now. How do you see the current Noisecore seen now-a-days? In what ways do you think Metal and Noise are connected? ]

Oh well I do not think a much of genres when I am releasing stuff. if its crude,nasty and original.. I am interested. Connection comes from some individuals who are involved in both scenes. Typical ug metal consumer hates noise most likely.. And cannot blame. There are so much utter crap around. Weak shit. 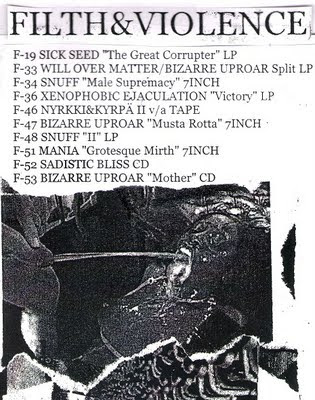 [PURESTENCH : What are some of your favorite releases on your label?]

They are ALL very important for me. Cannot pick any faves.


[PURESTENCH : What are some current projects out there that you have been listening to a lot lately? What are some of your favorite albums right now? ]

I listen a lot of F&V stuff before they get released. Now Its been time for HALTHAN Live, GOLDEN RAIN Live,RAPE, POGROM Live plus new Full length, BIZARRE UPROAR"Viha&Kiima" LP master etc. etc.


[PURESTENCH : What does Bizarre Uproar have planned for 2011? London Live first of October.]

Thank you
Posted by RyanStench at 8:10 PM

Email ThisBlogThis!Share to TwitterShare to FacebookShare to Pinterest
Labels: Interview